Our menu features fresh seafood selections and 28-day dry-aged Niman Ranch All-Natural Prime Certified Angus Beef® and custom-aged Certified Angus Beef® Tenderloin Filets prepared on our one-of-a-kind charcoal grill in an open exhibition-style kitchen. Our commitment is to sourcing the finest ingredients – and we proudly source the best products in the world.

Revel and Celebrate at Home with Our To Go Options

Celebration packages and many of our classic dishes are now available to pick up and enjoy at home.

Celebration Packages: Enjoying a birthday or anniversary with us is a treasured tradition and until each of our guests feels comfortable joining us in our restaurants, we are providing special Celebration packages for elevated in-home dining for two. Both the Iconic Gaucho Menu and the Surf & Turf package are available for $180 with the option to add select bottles of wine.

Northwest Oysters
half dozen on the half shell ~23

Scalloped Potatoes
a hint of spice ~12

We strive to provide our guests the highest level of service and quality when it comes to wine, our courteous and knowledgeable sommelier is always at the ready with a pairing suggestion. Our wine list includes well-known labels as well as wines from smaller, family-owned vintners. We have an extensive selection of wines by the glass as well as an ever-changing wine list, so even the most dedicated aficionados can expect to find new and exciting wines each time they dine with us.

For our guests wishing to enjoy that special bottle from their own cellar, you are welcome to do so. There is a corkage charge of $30 per 750 ML bottle with a limit of one bottle for every two people. For larger groups with multiple bottles, please inquire within the restaurant. Captain service and crystal stemware will be provided. Please contact us at 253-272-1510 for information.

We coordinate so you can celebrate. Our Private Dining team will create an experience for your most important business and personal moments. Our beautiful private rooms provide the perfect venue for your every occasion.

When serving guests and leading his team, Ryan Bear is inspired by the words of Dean Koontz and strives to “Brighten the corner where you are, and you will light the world.” He joined El Gaucho in June 2021 after nearly two decades in the hospitality industry and at 37 reached his goal of being a general manager by the age of 40. Ryan most recently served as the general manager of Everett’s 8800 at Big Sky Resort in Montana which is located at 8800 feet of elevation and only accessed by ski lift and stocked by a Snowcat vehicle.

Ryan was born in Staten Island, NY and grew up there and in the Bronx. His father played outfield for the NY Mets, Pirates, and Tigers, and won a World Series with the 1960 Pirates, where he played with Roberto Clemente. An avid reader and writer, Ryan graduated high school in the top 1% in the state of New York in English and graduated from Oklahoma Southern Nazarene University in Bethany, OK with a major in political science and a minor in journalism. He enjoys spending time with family and friends and singing Karaoke after enjoying a Rowan’s Creek Manhattan. 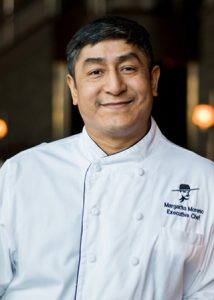 El Gaucho Bellevue executive chef, Margarito Moreno, says that he seeks to learn something new every day. After 14 years in the kitchen at El Gaucho Bellevue, Margarito is ready to lead and teach, while continuing to grow in his own career. Margarito grew up in Netzahualcoyotl, Mexico and learned to cook from his mother at the age of seven.

He moved to Seattle when he was 20 years old and worked for a variety of restaurants before joining the El Gaucho team in 2005. Over the last 14 years, Margarito has worked in every role and station in the kitchen. Margarito was promoted to Executive Chef because of his natural leadership, hard work ethic, passion for his team, and the El Gaucho culture and values.

Margarito enjoys spending time with his wife, Beatriz, his two daughters and son, his first grandchild and their dog.