Join us as we honor our history and begin a new era in Seattle’s Union Stables.

We will be closed Thanksgiving Day, Christmas Day and New Year’s Day.

Please note: In accordance with King County’s mandate, all guests 12 years or older are required to show proof of full COVID-19 vaccination or a negative test result taken within 72 hours of your reservation. All guests are required to wear face masks to enter the restaurant and when not seated at their table.

Our menu features fresh seafood selections and 28-day dry-aged Niman Ranch All-Natural Prime Certified Angus Beef® and custom-aged Certified Angus Beef® Tenderloin Filets prepared on our one-of-a-kind charcoal grill in an open exhibition-style kitchen. Our commitment is to sourcing the finest ingredients – and we proudly source the best products in the world.

Revel and Celebrate at Home with Our To Go Options

Celebration packages and many of our classic dishes are now available to pick up and enjoy at home.

Celebration Packages: Enjoying a birthday or anniversary with us is a treasured tradition and until each of our guests feels comfortable joining us in our restaurants, we are providing special Celebration packages for elevated in-home dining for two. Both the Iconic Gaucho Menu and the Surf & Turf package are available for $180 with the option to add select bottles of wine.

Scalloped Potatoes
a hint of spice ~13

We strive to provide our guests the highest level of service and quality when it comes to wine, our courteous and knowledgeable sommelier is always at the ready with a pairing suggestion. Our wine list includes well-known labels as well as wines from smaller, family-owned vintners. We have an extensive selection of wines by the glass as well as an ever-changing wine list, so even the most dedicated aficionados can expect to find new and exciting wines each time they dine with us.

For our guests wishing to enjoy that special bottle from their own cellar, you are welcome to do so. There is a corkage charge of $30 per 750 ML bottle with a limit of one bottle for every two people. For larger groups with multiple bottles, please inquire within the restaurant. Captain service and crystal stemware will be provided. Please contact us at 206-728-1337 for information.

Available in lounge only. Tuesday–Friday 4-6pm. Not valid on holidays.

We coordinate so you can celebrate. Our Private Dining team will create an experience for your most important business and personal moments. Our beautiful private rooms provide the perfect venue for your occasion. 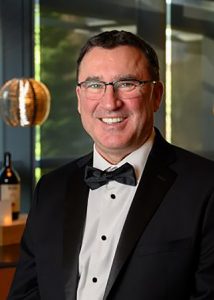 Rob Frost is the consummate hospitality professional. His reputation as a dedicated teacher, mentor and a proven ability to develop a strong team caught the interest of Fire & Vine Hospitality. In January, 2020, he chose to take the helm at El Gaucho Bellevue after hearing what he describes as the company’s “refreshing and positive vision.”

Rob spent his early career washing dishes in Sun Valley, Idaho to support his desire to ski but he loved the restaurant industry so much, he never looked back. Since then, he has worked in some of the Pacific Northwest’s best-known restaurants including the Union Square Grill, Hiram’s, and Ray’s Boathouse. Since 2012, Rob served as director of operations for Emory’s on Silver Lake in Everett, WA.

An avid outdoorsman, Rob enjoys spending time with his wife, Danielle and their son, Robert Jr. Rob fills his days off golfing, boating, fishing and bike riding adventures, as well as tending their extensive garden.

Chef Kirin Chun grew up in a family of cooks and began his culinary career at age 16 for restaurants in the Pacific Northwest, gaining experience and accolades along the way. He joined the El Gaucho Seattle team in 2014 as a pantry cook and was quickly promoted to Executive Sous Chef. In late 2017, Kirin was selected to join Miller’s Guild as the Chef de Cuisine and was quickly promoted to Executive Chef.  After three years working closely with chef Jason Wilson, Kirin has come home to lead the El Gaucho Seattle culinary team as Executive Chef at the new Seattle Union Stables location.

Kirin stays on top of new cooking trends through a lot of Instagram, cookbooks, and going out to eat whenever possible. In his free time, Kirin enjoys working on cars and motorcycles, fixing anything, drawing and writing.